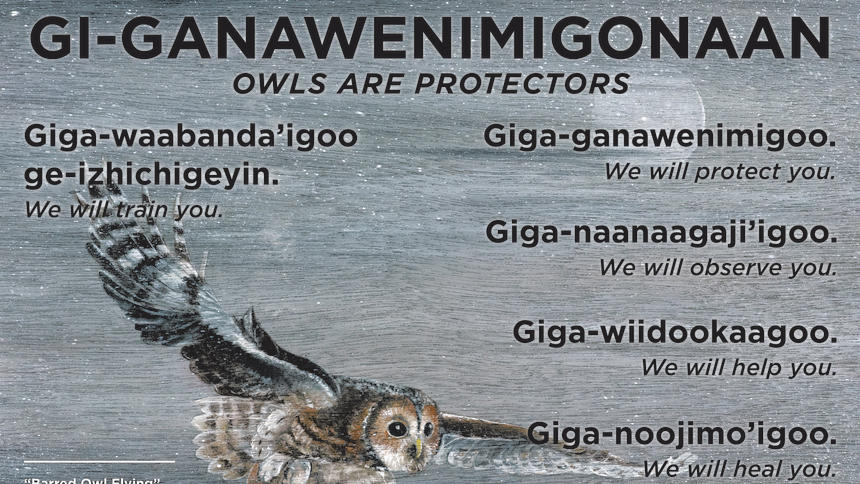 More than just advertising, posters have the ability to inspire and deliver powerful messages. Check out this story about how one middle school is using posters to make a powerful positive change.

BEMIDJI—A Bemidji educator wants to encourage a more positive discourse at his school.

Dan Ninham, a physical education teacher at Bemidji Middle School, and his wife Susan, an administrative officer at Red Lake Comprehensive Health Services, have hung a series of motivational posters in the middle school with phrases in a handful of Indigenous languages, including Ojibwemowin, and their English translations: “Niminwendam omaa ayaayan” next to “I am happy you are here” and “Gidebweyenimin” next to “I believe in you”—two phrases on one of the first posters the couple produced.

“It’s not only encouraging the Ojibwe language, but it’s also encouraging the English language —people telling each other good stuff, good phrases,” Dan Ninham, who also organizes Indigenous games at the school and around the Bemidji area, said after classes last week.

The hope is that students, staff, administrators and others soak up the positive messages on the posters, which are hung in high-traffic areas such as the cafeteria and a hallway near the gyms, and pepper them into their conversations with one another.

Ninham said he’s heard a few students do exactly that. Several used some of the phrases to create a fable for a class project, and some teachers have had students read from the posters as part of a class activity.

“Bottom line is we want it to be used,” Ninham said.

The posters are translated by language experts and use work by Indigenous artists. The Ninhams have collected a few sponsorships to pay for print runs. Dan Ninham said he’s mailed some posters to every school in Minnesota, Wisconsin, and Michigan that has Ojibwe students—about a “zillion” in all, he joked.

But the Ninhams’ initiative looks beyond a school’s walls. Under the banner of their “Empowered Youth Development Initiatives” project, they organized workshops last fall in Albuquerque, Green Bay, Wis., and more, all of which were designed to “strengthen the at-potential status of all children.” And they brought Olympic gold medalist and American Indian sports hero Billy Mills to Bemidji in 2014.

“We bring in big time people to inspire others and thus empower people on their path to being successful,” Ninham said.

He and Susan have scheduled another round of workshops in early June in Minnesota and Wisconsin, where speakers are set to expound on Indigenous ways of doing algorithms and energizing students to thrive through language and culture, among several other topics.

About 15 percent of the 1,000-plus students at Bemidji Middle School are American Indian, according to the Minnesota Department of Education data. Another 10 percent are identified as two or more races, a category that can often contain students who at least partly identify as American Indian.